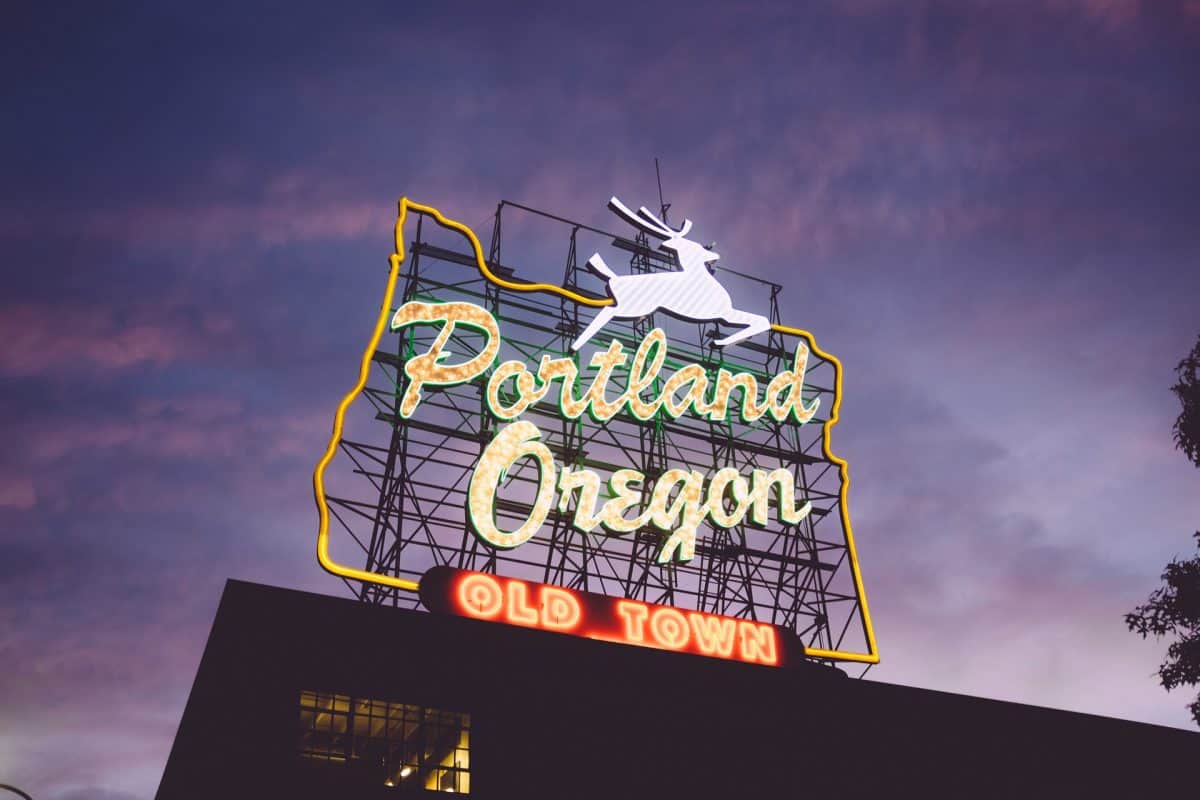 Portland, Oregon…aka “Brewtopia”…aka “Munich on the Willamette”…aka “Beervana”. Well known and well loved for the abundance of craft breweries and delicious food it’s a perfect place for a Portland Brewpubs Tour.

After Prohibition demolished the thriving brewery industry in the United Sates, the Pacific Northwest was in the forefront of a brewery revival in the 1980’s and Portland became home to one of the earliest microbreweries. There are now more than 100 breweries in the Portland Metro area ranging from small batch local microbreweries to full service brewpubs and well known large production breweries. It would take weeks to visit all of the breweries in Portland but we are up for the challenge.

To kick off that endeavor we have created a self guided walking tour that takes in a few of the great downtown Portland brewpubs where you can enjoy a brew and a bite Northwest style. As you probably know from experience it’s always a good idea to make food a part of any beer tasting and we feel the best way to do that is to share a menu item at each stop.

Also you won’t need a car for this one which means no need for a designated driver. If you are not staying downtown just take a taxi or transit to the start point and do the same in reverse at the end. The bonus is that you will be walking off some of the delicious indulgences between each course.

This Portland brewpub tour touches on some of the city’s favorite downtown neighborhoods. The route will take you from the Historic Waterfront District to the edge of Old Town Chinatown and through the desirable Pearl District so there are plenty of sights and distractions along the way. Luckily Portland’s downtown core is quite compact making it pleasantly walk-able. If you are in Portland as a tourist you may want to add some of these sights to your Portland Brewpub Tour so we’ve noted some suggestions and points on the map at the end of the tour guide.

We have given the Portland Brewpub tour a start and end time to give an idea of how long it will take to try a beer and a bite at each stop including walking time in between. However as most of the stops are open from morning to late evening, seven days a week you really can do it any time of day and of course if you choose not to eat at every venue your time will likely be cut back.

The start point for our Portland Brewpub Tour is Pints Brewing Company in the heart of Old Town. Pints uses traditional craft beer 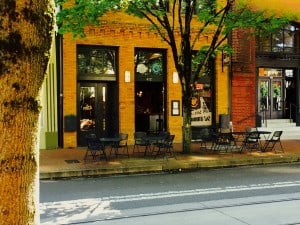 brewing techniques and serves their tasty brews and food in a comfortable, friendly setting. The taphouse actually starts as a coffeehouse in the mornings and transitions to a pub with live music and sports nights as the day wears on.

With an enticing selection of beers on tap and a delicious food menu it may be hard to pick just one item of each. May we suggest the Smoked Pork Poutine paired with a Steelbridge Stout or a Humus Plate and Lemon ESB?

After leaving Pints, head west on NW Flanders about 10 blocks. Just past NW 13th ave you will find Rogue Distillery & Public House, arguably one of the best known brewers in Oregon.

This meeting hall is one of several Rogue establishments in Oregon and as the name suggests it is a distillery as well as a home for Rogue’s many brews. You can take a distillery tour, sample Rogue’s spirits, have a bite to eat and do a tasting from 38 Rogue taps. For food try the Sriracha Stout Tacos with a Bathtub IPA cocktail followed by a Rogue Beer Float.

with a mindset of “brew beer, drink beer and have fun doing it” so you know you’re in for a good time here. Although with names like Apocalypse IPA and Sinister Black Ale you might think otherwise. If you feel like a beer break try the Bubbly Hard Apple Cider.

Tip: If it’s a nice day be sure to check out their awesome rooftop Patio!

From 10 Barrel go south a couple of blocks on NW 13th to get to Fat Head’s Brewery, home of award winning beers and sandwiches. Fat Head’s specializes in beers made in German, Belgian & Czech styles and has a mouth watering selection of Ales Stouts and Porters. With names like Zeus Juice, Battle Axe Baltic Porter and Oompa Loompa Chocolate Cream Stout you know you’re in for a taste sensation.

Hopefully you haven’t been tempted into fullness by now since Fat Head’s is home to some big ass chicken wings and “Headwiches” (sandwiches almost as big as your head). The “Southside Slopes” was voted the #5 best sandwich in the USA by Maxim Magazine.

Going east again to NW 11th ave will take you to the popular Deschutes Brewery, our final stop on the Portland Brewpub Tour. This

true Northwest style pub has 26 taps ready for your tasting pleasure including the Deschutes mainstays, seasonal specials and experimental beers brewed and served only at this location.

They also have an incredibly creative and delicious food menu. For something share-able we suggest the Northwest Clams with chorizo, cream and Flanders Black Ale or if you have room for a more substantial meal go for the Black Butte Porter Mac & Cheese. Of course it may be time for dessert in which case you can’t pass up the Obsidian Stout Brownie or for a smaller sweet treat a Black Butte Porter Truffle.

As promised at the start we wanted to share some side stops and add-on options for this tour as you will pass by some of Portland’s favorite downtown neighborhoods.

Somewhat in between Pints and Deschutes is the fun and nostalgic Ground Kontrol Classic Arcade. If you’re not in a food and beer coma by now this is a great way to spend the rest of your evening. This classic arcade “celebrates video gaming’s Golden Age with over 90 of the best arcade games from the past four decades”. Get ready to step back in time and relive your youth.

Once an area of run down warehouses and railways, the Pearl District is now one

of Portland’s most desirable neighborhoods. As you walk through this area from brewpub to brewpub take some time to check out the iconic buildings, boutique shops, art galleries and parks.

If you happen to do this tour on a Saturday we suggest you start with a stop at the Portland Saturday Market. The market sets up at the foot of Burnside St Bridge in Old Town Chinatown and offers more than 250 stalls displaying arts and crafts by Pacific Northwest artisans.

be so close to one of the most famous doughnut shops in Oregon we just had to point it out. Voodoo doughnuts establishments are as quirky and colorful as their mouth watering doughnuts but be prepared to wait in line. From their iconic “Voodoo Doll” and “Bacon Maple Bar” doughnuts to the cheeky “Cock-N-Balls” (yes it is shaped as it’s named) and “Old Dirty Bastard” doughnuts it’s as much fun picking your treat as it is eating it.

If you are looking to stay within walking distance of this tour there are quite a few good options although you will have to venture further out to find budget accommodations. Here’s a couple of our favorites close to the tour.

Founded in 1913 The Benson is a true historic landmark and offers elegant European design and modern amenities right in the heart of downtown. You can easily walk to shopping, dining, nightlife, sights and of course our Portland Brewpub Tour.

The Kimpton Hotel Vintage is a boutique accommodation offering comfortable,

unpretentious luxury just steps from Pioneer Courthouse Square. The other thing we love about this hotel is that they support local by having live music by Portland artists and pouring Willamette Valley wine.

Latest posts by Sarah (see all)