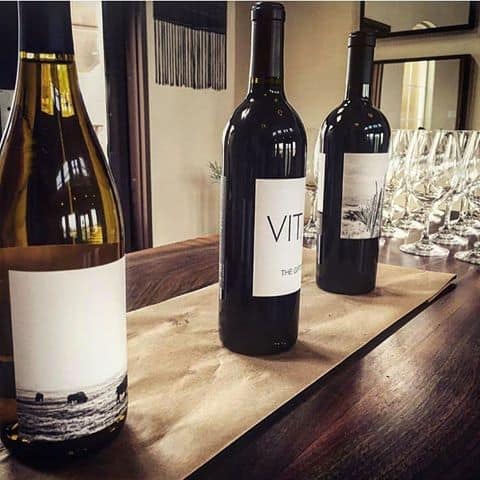 As I tour the wine industry, I have learned that to survive you have to have unparalleled patience and determination. As the insiders joke, the best way to make a small fortune in the wine business is to invest in a big one. However, there is one person in the Walla Walla Valley who strives to both make a profit and also give one away for the benefit of others. 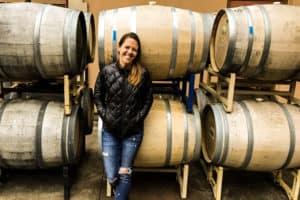 producing Malbec in Argentina. Locally, she started Flying Trout Winery in 2006, sold it in 2010 to Tero Estates, and stayed as that label’s winemaker until branching off in 2016 when she launched both March Cellars and Vital Wines.

So, first, the story of March Cellars and how it typifies Ashley’s true pioneer spirit.

March Cellars is an homage to the toil and tumult from the Western Era and to the spirit of those drawn to it. March Cellars got its name from the American Frontier Days when March was the last month to embark West and expect to arrive alive. To further emphasize this point, in bold letters on their website they declare March to be, “The precarious line between fortune and desolate hardship.” It’s not hard to see that Ashley’s self-described passion is for great wine and great adventure while possessing eternal stubbornness in the face of doubt or, God forbid, the word “no.”

Ashley also uses western history in referring to the Walla Walla Valley as a “gold rush.” By that, she means that the area shows the wide variety and spectrum of beautiful wines created here that can’t be found other places. In Ashley’s words, you will truly be able to say “you were there when” because of this exciting winemaking period. March Cellars currently offers Chardonnay and Cabernet Sauvignon with Cab Franc and Malbec arriving for Spring Release (May 5-7).

Second, Vital Wines’ core belief is, “Taking Care Of Each Other.”

Vital Wines sprung up from Ashley’s lifelong dream of starting a non-profit winery whose funds go toward helping local vineyard and winery workers get more affordable health care. All proceeds go to a local clinic that is dedicated to helping people get free medical care with no questions asked. Winemaking and vineyard work is both physically demanding and seasonal, making this kind of care so important.

To cover all of the many winemaking expenses, practically every part

of the winemaking process at Vital is made possible by donations of both raw materials and services from local wineries and individuals. This is truly a community effort to do the right thing for people in their industry. To find out how you can help, in addition to purchasing Vital Wine, visit their website at www.vitalwinery.com. Vital currently pours a Sangiovese Rose (deliciously dry) and a Gifted Blend (red) with a Cabernet Sauvignon coming soon.

Ashley was recently in Los Angeles for the Pre-Oscars Nominees & Affiliates party where she had the honor to pour both March and Vital wines for the Hollywood elite.This is an example of one of Ashley’s biggest takeaways from the wine industry, which is you never know who is going to drink your wine and where it might lead. In this case, the person organizing the gifting suites tasted a bottle of Vital Wine at a friend’s house who told her about its great cause, resulting in Vital being the exclusive winery at the party. Another example, Ashley said, of the power of Walla Walla Valley wines and a good heart.

It’s not necessary to leave your home this month to make it out west alive in time to visit March Cellars and Vital Wines but you’d better hurry. Spring is upon us and what better time to enjoy great wine while knowing you’re supporting fantastic people who have a big heart and are making a difference in people’s lives.

Owner at Tesla Winery Tours
"After years as an officer with the LAPD and a Special Deputy U.S. Marshal in Las Vegas, Jim and his wife Julia moved to the peaceful town of Walla Walla and started a new life and business venture. Walla Walla Jim, as he was dubbed by his tour guests, now runs the Eco friendly Tesla Winery Tours where he shares his passion for wine and the town he now calls home."